The BBC are following a British couple, Emily and Guy, who are going to spend an entire year during which they will only buy, use and consume goods and produce made and grown entirely in Britain. 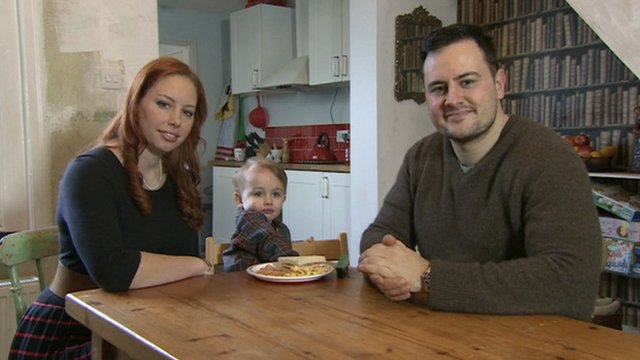 I am sure many of you upon reading this, will like me wonder if this is really practical or even possible today and not simply a stunt to make a TV program and some money in the process. This is further reinforced by Guy thinking that he can make a mobile phone from scratch after he had fun building valve radio. While I whole heartedly applaud Guy’s efforts in making a working radio he will find that it is impossible to source the parts required for a mobile phone that are actually made in the UK, namely semiconductors and other electronic components such as the touch screens.

We used to make a lot of clothes in the UK as recently as three decades ago. St. Michael being a famous British made clothing brand launched by none other than Marks and Spencers was world famous. But as Emily herself says, it is very difficult to find clothes made in Britain today. She highlights the difficulty in identifying the country of manufacture, which the suppliers/importers of these foreign garments seem to go to great lengths to obfuscate from the consumer.

This is at the crux of economic woes of Europe today. That we are making so little of stuff that we could easily make in the Europe or even Britain.

Even the bastion of european manufacturing like Germany is not immune to the phenomena of importing a lot stuff from outside Europe such as clothes. But an even more worrying trend is that some Germany companies like Osram actually manufacture light bulbs in China! Have we really got to a stage where we in europe can no longer make our own light bulbs cost effectively? I don’t think this is the case. It is simply the deregulation by european governments which has allowed companies to close factories in europe and move manufacturing to China and elsewhere. What this means is loss of real jobs in Europe especially for the younger generation. The only beneficiaries are the Corporate shareholders and direct importers/retailers of these goods which are sold to us, Joe Public in europe at grossly inflated prices for immense profits.

While in many cases Joe Public in europe would appear to benefit from cheaply Chinese manufactured goods for example, by the fact that is more choice. However, I argue that there is a cost. Namely, creation of a throw away society which has lost the ability to be creative and and use existing goods and technologies in innovative ways. One can argue that by that having all of these of foreign manufactured goods literally dumped on us has led to demise of imagination of children and limits their curiosity of our world, and their desire to make/invent stuff for themselves.

If we want to have creative children and support the economy of Europe and Britain in real terms,

we need to approach the problem from two different directions. First of all, we the need to nuture our children to reuse stuff in meaningful and problem solving ways, encouraging them to invent stuff.

Secondly, we as consumers need to ask ourselves each time we make a purchase a couple of simple questions â€“ who is benefiting from our purchase and how is our purchase benefiting them. Only then maybe will there be some hope of having a real manufacturing base flourish again in Britain. I don’t think we can manufacture all that we need but I am sure we can make a lot more stuff in the UK for close to the prices that we are paying to have them made in China. A lot of Chinese made products are dumped in the USA and Europe due the surplus quantities created in China due to both a lack regulation and unsustainable/environmentally disastrous manufacturing processes.

I think many British people like Emily, Guy and myself would not mind paying a bit extra for quality British made goods because we know it is creating real and sustainable jobs here. Just for the record, I am happy buying American manufactured goods as well. Love my Schott jacket đź™‚ Let’s hope more consumers with ask these two questions when they spend their money.

And to conclude, I’ll leave you will an link to an interesting read about why all is not well with the status quo.